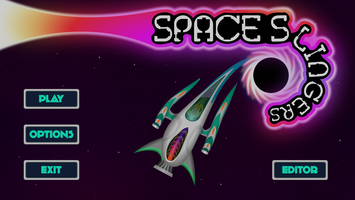 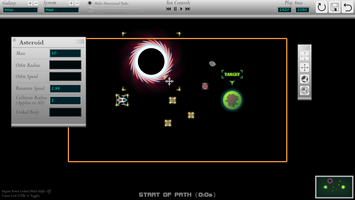 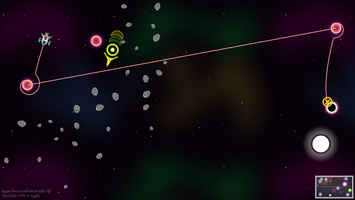 Well, after about a month of work, I've got a new version of Spaceslingers ready! There's literally too many changes to talk about, but the major ones are the Cosmos Editor has had a massive facelift and functionality update. There's a bunch of extra tools (well, every tool is new I guess, besides the ability to create Black Holes), there's a huge amount of tweaks and graphical updates, there's a proper GUI system now, basically everything is reborn anew.

There's also a completely new and expanded roster of puzzles. Still haven't gotten near the amount I want, but I didn't want this update to be -just- graphics/bug fixes/new Cosmos Editor, so I spent some time designing new levels and trying to create a nice difficulty curve as I introduce new celestial objects and challenges.

In some ways things a nearer completion and in other, more real, ways there's still a fair amount of stuff to do. I still need to create the Options screen (a lot of the behind the scenes code is there for the options, but I just haven't gotten around to making a GUI so that you can actually tweak the settings), I want to have a very tiny introduction storyline to the game, just something very simple and very quick but I haven't gotten to it yet. I need to do a lot of optimisation for the actual physics, especially the prediction system, which can TANK the FPS if used in very specific ways. And there's a million little extra tasks that I need to complete, but the game is really starting to come together and turn into something that I'm quite proud of.

Use the gravity of black holes to slingshot your cargo ship to your destination!